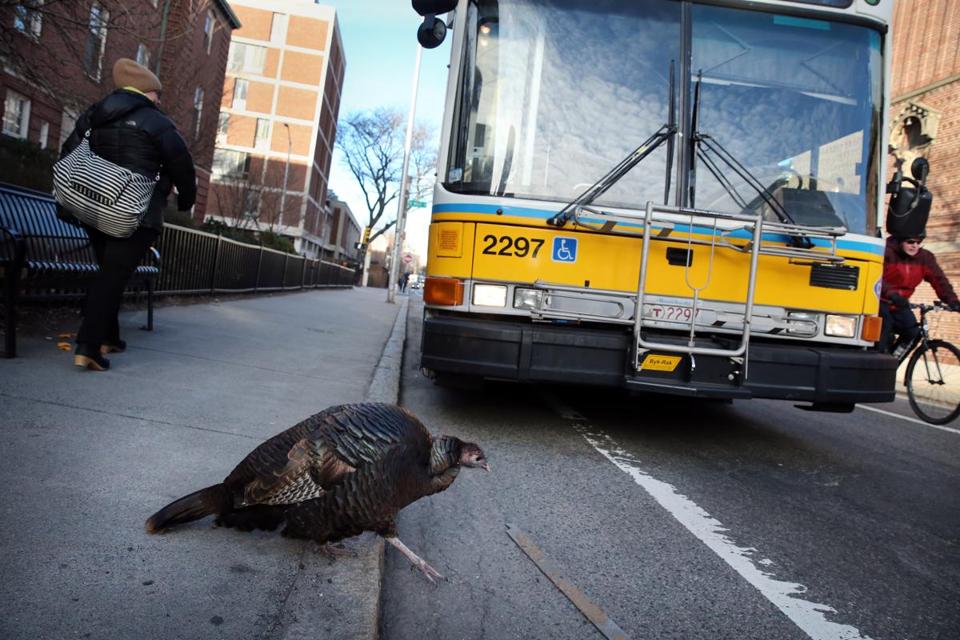 In an urban hub filled with no shortage of odd sights and characters, the so-called Harvard Turkey has perhaps established itself as the strangest.

Since the large, black-feathered bird began stalking the bustling streets of Harvard Square at a difficult-to-pinpoint date, its presence has captured the imagination of the quirky commercial district.

The turkey currently boasts a sizable Facebook following. It has been the focus of at least one Harvard-affiliated anthropological study, and it has served as the inspiration for both conspiracy theorists — some turkey-truth-ers remain convinced that there are, in fact, multiple Harvard turkeys — and for fan fiction.

Though wild turkeys are a familiar presence in Boston and its suburbs, neighbors in Cambridge speak of the Harvard Square turkey with a combination of wonder and awe, marveling at its chutzpah (“I’ve seen him just stop in the middle of the street, blocking traffic with blatant disregard,” says Tom Chamberlain, an employee at Leavitt & Peirce in Harvard Square). And a mere sighting of the bird is enough to whip onlookers into a state of delirium.

During a recent run-in with the turkey, for instance, Cambridge barre instructor Kathryn Miller became so flustered, she admits, that “I walked right into a stop sign.” And yet, for all the attention it has received, the turkey has largely remained an enigma.

Concrete information is difficult to come by. No one seems sure where, exactly, it sleeps. Its gender has been the source of much speculation. And with the exception of a near-daily trip to the Harvard Bureau of Study Counsel on Linden Street — where it stops to peer into the front window and defecate on the porch — the turkey remains a rather elusive presence.

Zach Strecker, a Harvard sophomore who gives campus tours, said recently he sees the turkey only once a month, maybe less. Asked about the bird’s habits, Emmaline Crook, an employee at the Harvard Book Store — believed to be one of the turkey’s regular haunts — could offer little direction.

“Tracking the turkey is very difficult,” she explained. “It’s a very fickle beast.”

With so little information to go on, those occupying the square have been left to rely on speculation to fill in the gaps. Maybe, they suggest, the turkey is part of some elaborate prank concocted by students. (The turkey has been oft-spotted, after all, on Bow Street, not far from where the Harvard Lampoon has its headquarters). Maybe it is a jilted lover who arrived in Cambridge seeking a fresh start.

Or it could be, as one woman who was shopping for jewelry recently on Mass. Ave. surmised, a Harvard graduate unable to move on.

Opinions of the turkey, meanwhile, are varied. Some paint it as a kind of neighborhood enforcer — Whitey Bulger, with a snood. It is alleged that the turkey once chased a pedestrian into a bank, keeping her pinned inside for 10 minutes. Another time, as a neighborhood restaurant worker set up a sandwich board on the sidewalk, the turkey is said to have waddled, uninvited, right into the establishment.

A man behind the bar at the restaurant in question — perhaps fearing retribution — politely declined to comment last week but did offer that he’d just seen the turkey at a nearby intersection, next to a Qdoba.

One day, Crook was walking along Brattle Street when she came across the turkey standing in front of a storefront, looking preoccupied. As Crook approached, she realized that the store’s window featured a fall-themed display, complete with decorative corn.

“The turkey was standing in front of the window, just staring at the corn,” she says. “It was kind of sad.”

Complicating matters is that, as the turkey’s stature has grown, so too has the myth surrounding it. Tales of the turkey’s exploits have taken on an almost fabled quality, fact and fiction blurring together in curious mash-up.

Some stories, like the one about the bird attempting to grab a french fry from an outdoor diner’s plate, seem plausible enough. Others — such as its adoption of human traits, right down to using the cross-walk — seem outlandish, even absurd.

Take this anecdote from John McHugh. Working behind the counter at Mr. Bartley’s Burger Cottage on a recent morning, he insisted he’d once witnessed the turkey being chased down the road by a person dressed as a bald eagle.

“All the way down the street!” McHugh said. “If I had my tablet, I could show you a picture.”

But despite the heft of its legend, the reality, it turns out, is far less glamorous.

After a search spanning several days and countless hours, the turkey was finally located Monday morning on Holyoke Street, where, over the next few hours, it proved to be a very typical and down-to-earth turkey.

Yes, it occasionally wandered into traffic, irritating drivers. And true, it paused roughly every 20 feet to examine its reflection in a nearby window or car door. But mostly, it spent its day engaged in typical turkey pursuits: pecking at car tires, getting its picture taken by pedestrians, doing some light window shopping on Mass. Ave., and eating an apple it found by a dumpster.

By late afternoon, as the sun had begun to droop and a chilly wind whipped through the narrow streets, the turkey seemed to have had its fill. It ambled slowly down Linden Street, its twiggy legs carrying it south, away from the foot traffic and honking horns and exhaust-belching buses of Mass. Ave.

And as it made its way through the city, past the alleyways and businesses, the Harvard Turkey seemed to be exactly where it belonged.